Alternative powertrains on the test bench 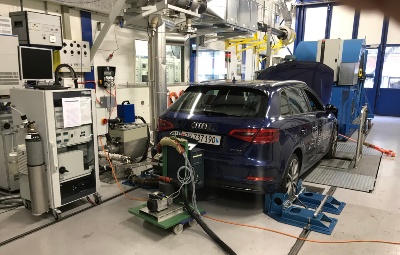 Energy consumption of passenger cars usually lies well above manufacturer indications. This also holds true for electric and other alternative powertrains as was shown by a study from ETH Zurich and Empa. These results will help design realistic scenarios for consumption and emissions.

When buying a new car, you quickly realize that energy consumption usually lies well above what is indicated by the manufacturer. This is because manufacturers rely on type approval data, where energy consumption measurements are determined with standardized test bench runs, which often replicate vehicle use insufficiently (e.g. no auxiliaries are considered, the test is performed at temperatures around 23°C). The formally used test cycle underestimated fuel consumption by 40% on average. The new test cycle, which is in use since 2020, will probably cause this discrepancy to shrink, however for diesel, gasoline and electric vehicles the difference will still be around 20 - 30%, for plugin-hybrid vehicles, however, they could be much higher. Such deviations are annoying for car owners. They also jeopardize political measures for climate protection, as consumption limits are currently based on such standard values. If these are systematically too low, political requirements will not fulfill their aim.

A team of researchers from ETH Zurich and Empa investigated five powertrain technologies, which give hope for climate-neutral mobility: an electric vehicle (VW e-Golf), a plug-in hybrid (Audi A3 e-tron), a full hybrid (VW Jetta), a car run on compressed natural gas (Audi A3 g-tron) and a fuel cell electric vehicle (Hyundai 1x35 Fuel Cell). The fuel consumption of these five vehicles was measured on a chassis dynamometer (13 pre-defined drive cycles in total). In addition, they were tested during an on-road measurement campaign, which initiated at the beginning of 2016 and completed in fall of 2018. The vehicles covered a total of 115 000 km during 3000 trips. Consumption data was logged meanwhile. The Swiss Federal Office of Energy (SFOE) supported the study.

Consumption 20-30% higher than indicated by the manufacturers

The assessment of the collected data showed that the actual consumption of these alternative powertrains was 20-30% above what was indicated by the manufacturers. “So to the same extent as is the case with diesel and gasoline cars”, Lukas Küng, co-author of the study, summarizes the main result. The magnitude of the deviation depends on the situation. Küng and his colleagues found out that the difference between manufacturer indications and actual consumption depends on four user-specific factors: average speed (city traffic vs. highway), acceleration behavior (“eco-drive” vs. “dynamic” driving style), topography (flat vs. mountainous terrain) and outside temperature (critical for the fuel consumption of auxiliaries like heating or air conditioning).

Model of the Swiss car fleet

The goal of the scientists at ETH Zurich and Empa is not to determine the consumption of a single vehicle as precise as possible. Rather, the aim is to develop a model based on these insights to assess the energy demand of the national car fleet reliably. The model will elucidate how consumption and emissions of the Swiss car fleet change depending on which powertrains are on the road.

In Switzerland, there are around 4.5 million passenger cars and every year 300 000 old cars are replaced by new ones. Therefore, it takes about 15 years for the entire fleet to be renewed, of which an increasing part is operated electrically. In order to make the whole fleet “cleaner”, it is not enough to deploy electric cars increasingly. Rather, political measures need to promote a faster substitution of fossil-powered cars in parallel, for example with “scrapping incentives” (for this calculation, the scientists did not consider grey energy). At the same time, the distribution and use of fuels with lower CO2 emissions (e-fuels, bio-fuels) needs to be supported more heavily.