Hydrogen, Scaling up - a strategy for a sustainable energy future 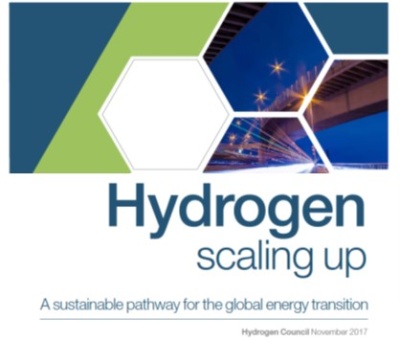 The Hydrogen Council, a global industry coalition promoting the development of a hydrogen economy, recently released a comprehensive report entitled Hydrogen, Scaling up. It outlines quantitatively the contribution of hydrogen in fostering the energy transition, meeting international CO2 emission targets and thus abating global warming. The report estimates that hydrogen could cover almost one fifth the of world’s final energy demand by 2050, thereby contributing about 20% of the emission reduction needed to meet the 2 degree goal of the Paris Agreement.

In the transport sector, the report estimates that 10 to 15 million cars could be powered with hydrogen by 2035 and even up to 400 million by 2050. Further, it projects that FCEVs, enabling long range, fast-recharge electric mobility, will be cost competitive with conventional cars and battery electric vehicles by around 2035.

We asked Felix Büchi, group leader Fuel Cell Systems and Diagnostics at PSI and Deputy Coordinator of Capacity Area A2, to comment on the feasibility of such targets. He says that the 2035 goal, which roughly translates to about 1 million FCEVs sold per year, might well be possible and rather more realistic than other assessments (e.g. a PwC report estimates that about 5 million FCEVs will be sold per year in 2035). Concerning projections to 2050, while hydrogen has the potential to be a major low CO2 energy carrier, Felix Büchi thinks that long-term trends will depend heavily on technological developments in the different sectors (i.e. batteries, synthetic fuels, hydrogen). Likewise, cost parity forecasts are difficult, as new policies (i.e. carbon tax) will have a strong influence. However, he says that infrastructure investments for hydrogen fueling stations are already paving the way for these ambitious aims. For example, Germany plans to install 100 stations in the next two years and 400 by 2023 and it is possible that other countries will follow suit.

To get the full story, check out the full report.