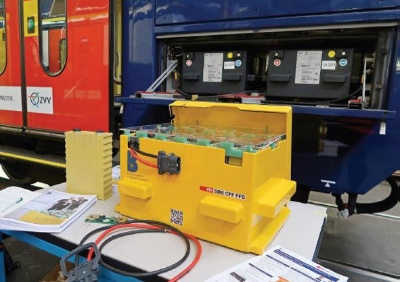 Even though the entire Swiss Federal Railway (Schweizerische Bundesbahn, SBB) network is equipped with power lines, each train carries one or more batteries on board. These batteries are an important safety feature as they supply power to the rail cars in emergencies and during regular short interruptions, for example, when they are recoupled at stations. This guarantees that the lighting, doors, information system and the magnetic rail brakes of the rail cars are fully functional at all times. Today, each on-board battery weighs 334 kg, meaning that SBB trains transport 2000 t in battery weight alone. Consequently, more energy is consumed and tracks are worn down due to this weight. To reduce this energy demand and resulting costs, SBB plans to phase out its heavy lead-acid batteries gradually and replace them by a more modern and durable battery system that can be monitored.

Developing this railway-compatible battery is challenging, as installation should not require substantial modification. To this end, the SBB project “New battery technology SBB” was initiated in 2014. It is a collaborative effort together with the BFH Energy Storage Research Centre (ESReC) in Biel.

Three years after project kick off, researchers have produced a functional prototype. Contrary to the current batteries, the system is composed of lithium iron phosphate battery cells; it is lighter by a factor of three and smaller by a factor of two. The battery provides several advantages: reduced weight lowers energy demand and the chemical composition of the battery cells increases efficiency, durability, lifetime and safety. Additionally, it is equipped with a battery management system (BMS), which ensures that the battery is charged optimally, further raising its lifetime to about 12 years or even more (current batteries have a lifetime of only 5-7 years). Thereby, overall lifecycle costs and resource consumption were lowered substantially.

The public procurement process has started recently and several battery suppliers will make an effort to offer a battery system satisfying the increased demands regarding lifecycle costs and monitoring specifications. The functional prototype now serves as a reference for the experience gained and technical features to be implemented.

Read more in an article by the Swiss Federal Office of Energy (SFOE), that supports the project as part of its pilot and demonstration program.

For more information about the BFH Energy Storage Research Centre, refer to BFH-ESReC.

For more information about the project, contact Christian Vögtli.

Prof. Andrea Vezzini, who is Deputy Head of SCCER Mobility and coordinates Capacity Area A1, also directs the BFH-ESReC.